FORT WORTH, Texas (May 6, 2021) – The National Cowgirl Museum and Hall of Fame and the Fort Worth Film Commission announce the new exhibition Twelve Mighty Orphans – Behind the Scenes: Laura Wilson, featuring photography and props from the new film by Sony Pictures Classics.

The exhibit opens June 8 and will run through August 8. The film premieres June 11 in Texas and New York and nationwide on June 18.

Photographer Laura Wilson is an Honoree in the National Cowgirl Museum and Hall of Fame. Her son, Luke Wilson, plays a leading role in the movie, filmed on location in Fort Worth.

“This exhibition will be particularly engaging for visitors because it combines the lens of Laura Wilson, an Honoree, with behind-the-scenes views and props from the movie,” the museum’s Associate Executive Director Dr. Diana Vela said.

12 Mighty Orphans tells the story of the 1930s-era football team from Fort Worth that captured national attention during its Cinderella season. The production filmed in the city in 2019 with support from the Fort Worth Film Commission, a division of Visit Fort Worth.

“This special exhibit captures the magic of the movies and this very Fort Worth story,” said Film Commissioner Jessica Christopherson. “This type of community support will help us welcome even more production to the city.”

The Tough by Nature: Portraits of Cowgirls and Ranch Women of the American West exhibition currently on display in the Anne W. Marion Gallery will be closing early next week on May 12 for the incoming exhibition. 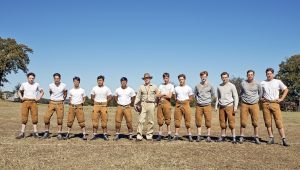 About the National Cowgirl Museum and Hall of Fame
The National Cowgirl Museum and Hall of Fame honors and celebrates women, past and present, whose lives exemplify the courage, resilience and independence that helped shape the West, and fosters an appreciation of the ideals and spirit of self-reliance they inspire. Established in 1975, the Museum is considered an invaluable national educational resource for its exhibits, research library, rare photograph collection and award-winning distance-learning programs for grades K-12 and adults. In 2019, the Museum opened the Kit Moncrief Galleries and It’s Never Just a HorseTM exhibition. Located at 1720 Gendy Street Fort Worth, Texas 76107. Hours of operation are Tuesday – Saturday from 10 a.m. to 4 p.m. Admission is $10 for adults (ages 13+); $7 for seniors (60+), military, first responders and children (ages 3 to 12) and children 3 and under get in free with paid adult. For more news and information visit www.cowgirl.net or call 817-336-4475 and follow on Facebook, Twitter, Instagram, Pinterest and YouTube.

About the Fort Worth Film Commission
The Fort Worth Film Commission, a division of Visit Fort Worth was established in 2015 with the goal of serving as a beacon for the creative class. Since 2015 the film commission has worked with hundreds of projects and driven $47 million in economic impact and over 4,000 jobs. Highlights of projects include films such as: A Ghost Story, The Old Man & the Gun, Never Goin’ Back, No Future, Miss Juneteenth and 12 Mighty Orphans. For more information visit FilmFortWorth.com and follow on social @FilmFortWorth.