Right before the final round 2019 Wrangler National Finals Rodeo the National Cowgirl Museum and Hall of Fame and the Women’s Professional Rodeo Association awarded to the Jerry Ann Taylor Best Dressed Cowgirl Award to one lucky NFR barrel racer. For the second year in a row, Jessica Routier took home the win and $5,000! This award was fan voted during the first nine performances of the NFR. We were happy to be featured on the Cowboy Channel, Wrangler Network, and WPRA.

Jerry Ann Taylor was a daring trick rider who brought a style, glamour and spirit to the rodeo arena. She was inducted into the National Cowgirl Hall of Fame in 1986. Following her passing in February 2012, a fund was started by her husband Dutch Taylor, her mother Jo Matthews, and other donors, to reward cowgirls who carry the same sense of style.

The National Cowgirl Museum and Hall of Fame has partnered again with the Women’s Professional Rodeo Association to award another Jerry Ann Taylor Best Dressed Cowgirl Award and $5,000 cash prize at the Fort Worth Stock Show & Rodeo at their new home inside the Dickies Arena. This award is judged by a panel during the final round of the rodeo. 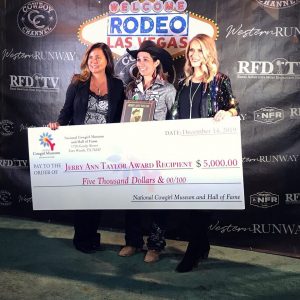