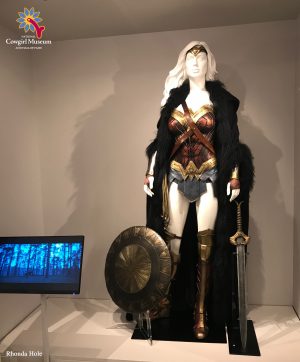 FORT WORTH, TX (February 28, 2019) – The National Cowgirl Museum and Hall of Fame has many exciting secrets under its cowgirl hat for the grand reopening of the second floor, the Kit Moncrief Galleries and It’s Never Just a HorseTM exhibition. A suit fit for a hero will join the newly renovated second floor.
The “Wonder Woman” costume created by Lindy Hemming and worn by Gal Gadot who starred as Diana, aka “Wonder Woman” in the 2017 blockbuster movie, is now on display at the Museum.
The connection between the famous costume and the Museum lies with an Honoree inducted in 2018, Camilla Naprous.
She has dozens of television and movie credits to her name as horse master, including the award-winning “Game of Thrones” HBO television series and many other award-winning films such as, “The Favourite” which just won an Oscar for Actress in a Leading Role, Olivia Coleman. In fact, it was Naprous who taught Coleman how to ride.
The equestrian works and stunts in the “Wonder Woman” film were coordinated by Naprous who also served as a stunt double. Along with the costume, there is a short film compilation that highlights some of the horse work Naprous completed for the film. As a horse master, countless hours of work go into the horsemanship, training of the horses and actors, choreography and execution of the movie scenes with horses.
“We are continually exploring the many ways that horses have in the past, and will continue, to influence us,” says Dr. Diana Vela, associate executive director. “The inclusion of Naprous, and her work highlights the wide variety of cowgirls we honor in the Museum.”
In addition to the Wonder Woman costume, the Museum also has a saddle from “Game of Thrones.” This particular saddle was used by Kit Harington, who played Jon Snow in the series.  Both of these unique items will be on display when the Museum reopens to the public on March 9.
About Camilla Naprous
Camilla Naprous has worked as the horse master on the acclaimed HBO series “Game of Thrones” for all eight seasons bringing stunning horses and spectacular stunt riding sequences to the show. She has worked with the series’ stunt coordinator to choreograph ambitious battle scenes with extraordinary horse action. Naprous’ extensive list of credits includes training a myriad of actors with whom she builds intimate working relationships. Teaching actors to ride horses and helping to build their characters is a creative process she loves; through it, she imparts skills, confidence, trust and a unique bond between horse and rider. Camilla also works closely with directors in pre-produc-tion and enables them to bring their creative vision to life using period specific horses, carriages and tack. She has worked as horse master on multiple productions, including “Wonder Woman,” “Pan,” “King Arthur: Legend of the Sword” and “The Monuments Men.”
About the National Cowgirl Museum & Hall of Fame
The National Cowgirl Museum and Hall of Fame honors and celebrates women, past and present, whose lives exemplify the courage, resilience and independence that helped shape the American West and fosters an appreciation of the ideals and spirit of self-reliance they inspire. The Hall of Fame’s purpose is twofold: to preserve the history and impact of Western women living from the mid-1800s to present day and to foster an appreciation for their ideals and spirit of self-reliance. These women are the legacy of legends — artists and writers, champions and competitive performers, entertainers, ranchers (stewards of land and livestock), trailblazers and pioneers. The Museum is considered an invaluable national educational resource for its exhibits, research library, rare photograph collection and award-winning distance-learning programs for grades K-12 and adults. Located at 1720 Gendy Street, Fort Worth, TX 76107.
Museum hours are as follows: Tuesday – Saturday: 10 a.m. – 5 p.m.; Sunday: Noon – 5 p.m.; Closed Mondays (including summer); except during FWSSR and Spring Break (March 11): 10 a.m. – 5 p.m. Admission Rates are as follows: Adults – $12.00; Seniors (age 65+), Military & First Responders – $9.00; Children (age 4-12) – $6.00; Children age 3 and under – free with paid admission. Click here to plan your visit.
MEDIA CONTACT: Madison Ward
817.509.8969 | mward@cowgirl.net
###
Posted on March 4, 2019 in Blog, Media, Press Release