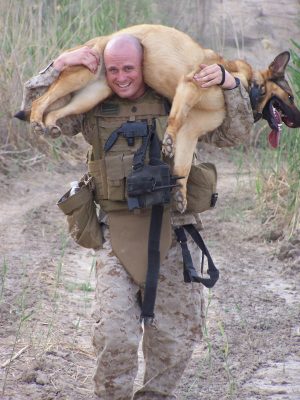 FORT WORTH, TEXAS (Aug. 17, 2021) – The National Cowgirl Museum and Hall of Fame announces the new Sergeant Reckless Award recipient, Lucca K458, USMC. The war dog has been honored in our Alice Walton Cowgirl Park with a statue, created by artist Jocelyn Russell, named “Send Me.” Lucca will be recognized at the 45th Annual Induction Luncheon and Ceremony on Tuesday, Oct. 26, 2021, at the Dickies Arena. 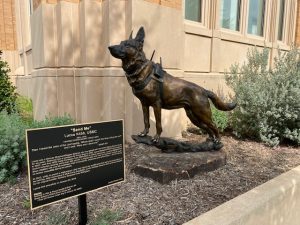 Lucca (2004 – 2018) was a German Shepherd/Belgian Malinois mix who served with the United States Marine Corps for six years with the 1 Marine Expeditionary Force (MEF). Stationed first at Lackland Air Force Base in 2006, she trained at MCB Camp Lejeune in 2007, and then MCB Camp Pendleton from 2008-2012 to detect explosives.

Lucca’s distinguished record includes leading more than 400 patrols in Afghanistan and Iraq during three combat tours. She’s credited with over 40 confirmed finds of insurgents, explosives and ammunition — and for having no human casualties during her patrols. Lucca has been honored with medals for her service: Animals in War & Peace Medal of Bravery #6 and Great Britain’s PDSA Dickin Medal #67, the first US Marine Corps dog to receive the honor.

In 2012, while on patrol in Afghanistan, she was injured by an IED blast that led to the amputation of her left leg. After recovering at MCB Camp Pendleton, Lucca officially retired in 2012 and was adopted by her original handler, Gunnery Sergeant Chris Willingham. She died peacefully on Jan. 20, 2018.

“Cowgirls have a long and storied relationship with animals and while the most common animal related to the cowgirl is a horse, the dog would be a close second,” said the Museum’s associate executive director Dr. Diana Vela. “We are pleased to honor Lucca’s legacy as one of those animals that is deserving of the Sergeant Reckless Award.”

The Sergeant Reckless Award recognizes animals, individuals, or groups who risk their lives for the betterment of others, and who stand courageously in protection of others. This award is named in honor of the most decorated war horse in modern history. The first recipient of the award was Robin Hutton, who has dedicated her life’s work to researching and telling the stories of war animals, including Sergeant Reckless and Lucca.

Reserve your table and learn more information about Induction Luncheon and Ceremony sponsorship opportunities at http://www.cowgirl.net/hall-of-fame/.

About the National Cowgirl Museum and Hall of Fame
The National Cowgirl Museum and Hall of Fame honors and celebrates women, past and present, whose lives exemplify the courage, resilience and independence that helped shape the West, and fosters an appreciation of the ideals and spirit of self-reliance they inspire. Established in 1975, the Museum is considered an invaluable national educational resource for its exhibits, research library, rare photograph collection and award-winning distance-learning programs. In 2019, the Museum opened the Kit Moncrief Galleries and It’s Never Just a HorseTM exhibition. Located at 1720 Gendy Street Fort Worth, Texas 76107. Hours of operation are Tuesday – Saturday from 10 a.m. – 5 p.m. and Sunday from noon – 5 p.m. Admission is $12 for adults (13+); $9 for seniors (60+) and military; $6 for children (ages 3-12) and children 3 and under with paid admission. For more news and information visit www.cowgirl.net or call 817.336.4475 and follow us on Facebook, Twitter, Instagram, Pinterest and YouTube.