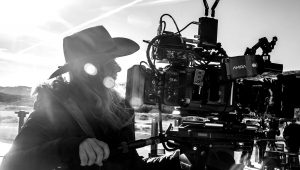 FORT WORTH, TEXAS (Jan. 6, 2021) – The National Cowgirl Museum and Hall of Fame will present the Patsy Montana Award to cinematographer Christina Voros at the 45th Annual Induction Luncheon and Ceremony. The luncheon will be held on Tuesday, Oct. 26, 2021 at the Dickies Arena where the Museum will also induct five new Inductees.

The only daughter of Hungarian refugees, Voros was raised in Cambridge, MA where she later attended Harvard University. She was granted the Dean’s Fellowship at New York University Tisch School of the Arts for the film and television graduate program in 2004 where she studied under Spike Lee and Sandi Sissel, receiving her Master of Fine Arts in directing and cinematography in 2010.

Her journey to cinematography came through shooting her own award-winning documentaries. She has lensed films for many filmmakers, including James Franco and Tate Taylor. In 2018, Ava DuVernay and Oprah Winfrey tapped her to direct an episode of their series “Queen Sugar.” Since then, she has directed and served as the director of photography on shows “Filthy Rich” and “Yellowstone.”

Voros’ involvement with the hit series “Yellowstone” started season one. Beginning as a camera operator, she became the director of photography for season two and four and has directed four episodes. She has been the only female director and director of photography for this popular series. Currently, she is in development on her feature indie film, “Valentine,” which she will write and direct, inspired by stories of the people and land of West Texas, where she resides.

She first became known to the Museum five years ago when she was researching for a “year in the life” film following young cowgirls who made commitments to the ranching life. This project was put on hold, but she is now looking to return to the project as it may evolve into an extended narrative on their lives from five years ago to where they are now.

“We are accustomed to seeing women in front of the camera instead of behind, so we are particularly pleased to honor Voros,” said the Museum’s associate executive director Dr. Diana Vela. “She is a role model for other young women who have a desire to create behind the lens and become part of the larger conversation around diversity and inclusion in media.”

Named after 1987 Honoree Patsy Montana, this award recognizes those whose work in the entertainment field and continue to advance the tradition of the cowgirl in the areas of film, television, music, writing and theatre. Previous award winners include Emmylou Harris, Jessie the Cowgirl from Toy Story 2 and Callie Khouri.

Induction Luncheon and Ceremony sponsorship opportunities are available at http://www.cowgirl.net/hall-of-fame/.

About the National Cowgirl Museum and Hall of Fame
The National Cowgirl Museum and Hall of Fame honors and celebrates women, past and present, whose lives exemplify the courage, resilience and independence that helped shape the West, and fosters an appreciation of the ideals and spirit of self-reliance they inspire. Established in 1975, the Museum is considered an invaluable national educational resource for its exhibits, research library, rare photograph collection and award-winning distance-learning programs. In 2019, the Museum opened the Kit Moncrief Galleries and It’s Never Just a HorseTM exhibition. Located at 1720 Gendy Street Fort Worth, Texas 76107. Hours of operation are Tuesday – Saturday from 10 a.m. – 4 p.m. Admission is $10 for adults (13+); $7 for seniors (60+); $4 for children (ages 3-12); free for military, first responders and children 3 and under with paid admission. For more news and information visit www.cowgirl.net or call 817.336.4475 and follow on Facebook, Twitter, Instagram, Pinterest and YouTube.