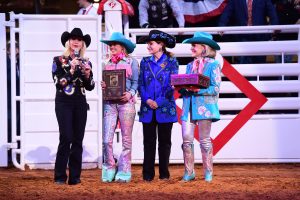 FORT WORTH, Texas (Feb. 8, 2020) – For the second consecutive year barrel racer Jimmie Smith of McDade, Texas, finished second in the championship finals at the Fort Worth Stock Show & Rodeo (FWSSR).

Once again Smith finished second, behind repeat champion Hailey Kinsel Lockwood on Saturday, Feb. 8. Smith earned $12,000 in the new FWSSR ProRodeo Tournament format for her runner-up finish, then found out she would leave the 124th FWSSR with a $5,000 bonus.

The annual Jerry Ann Taylor Best-Dressed Cowgirl Award is a $5,000 cash award given to a barrel racer during the Championship Finals at Fort Worth. The award is also given to a barrel racer at the Wrangler National Finals Rodeo (NFR). Taylor, a 1986 National Cowgirl Hall of Fame honoree, was a flamboyant trick rider and roper who was known for her sense of style.

Smith wore turquoise and pink, with plenty of shimmer for her run. Her outfit was made by Natasha Roberts, who works with Smith’s mom, and Roberts’ mother.

“There’s a lot of well-dressed women who have won this award before me,” Smith said, adding that the Fort Worth rodeo is special to her.

“It’s one of my favorites. Last year it was my first win at a big winter rodeo,” she said. “I love Fort Worth, San Antonio and San Angelo.”

The Texas A & M graduate was the 2018 Women’s Professional Rodeo Association Rookie of the Year. Last year she finished 19th after her palomino mare Lena on the Rocks was injured at the Calgary Stampede.

This year she was ranked third before her Fort Worth earnings were tabulated and is aiming for her first NFR. The bonus money will help keep her on the road and chasing that dream.

Pam Minick of Fort Worth, a National Cowgirl Museum and Hall of Fame board member and honoree and former WPRA vice president, said the award is to encourage women in professional rodeo to carry on the tradition of wearing colorful western attire in the rodeo arena.

Barrel racing has a long history at the FWSSR. The Fort Worth rodeo began holding an invitational ranch girls barrel race in 1955, not long after barrel racing competition started. 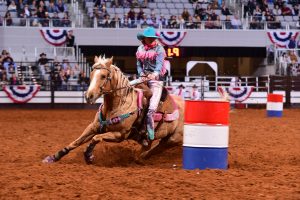